First of all well done to everyone who took part on Sunday and thank you for your co-operation in helping the event run as smoothly as possible. I hope that everybody had an enjoyable swim despite the slightly adverse conditions. This year we were amazed by the sharp increase in demand for places. Our largest entry ever was 45, and this year, we had to cap entries at 70, just two weeks after opening. Despite the large numbers, the event still ran smoothly as almost everybody had registered well before the start of the briefings, and in a not so typical Irish fashion, we started 5mins early! 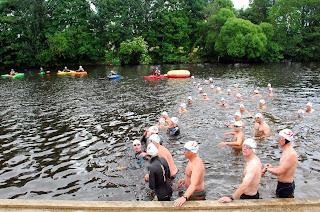 The 6km race began with a mass start at 1:55pm. There were two clear leaders from early on. They were Sarah Clifford and Colleen Mallon. They stuck together, stroke for stroke for the entire race and as they approached the finish line, it was very difficult to decide who was leading. In the end, it had to go to a photo-finish, and it was decided that the winner was Colleen Mallon from Newry, in a time of 1hr 38mins 08secs. Well done Collen! We would also like to wish Sarah the very best of luck with her 18km Strait of Gibraltar swim this July. Full results can be downloaded from this site.

The 2km race started 1hr later in a double start. First off were all the under 14s: Billy Mulcahy from Dolphin SC, Emer Herlihy, Karen Sheehan, James O'Mahony, Seán Hegarty, Paul Noonan, Ellen Brooks, Conor O'Brien and Philip O'Flynn, all from Fermoy SC. They were followed shortly by the rest of the field. All swam a great race and in the end it was Chris Mintern from Sunday's Well SC who finished first in a time of 25mins 26secs. Well done especially to all the young swimmers for whom this was their first open-water race, you all did brilliantly! Full results can be downloaded from this site.

The prize for the youngest swimmer went to Ellen Brooks from Mitchelstown who swims with Fermoy SC. Ellen was just 12yrs 26days old when she swam the 2km on Sunday in a time of 37mins 34secs. She beat the previous record for the youngest swimmer (held by her brother Stephen) by 197 days! Well done Els! In the picture attached, Ellen is presented with the Martin Duggan Memorial Shield by Bernie Duggan (mother of Martin Duggan) and Stephen Brooks, who won the shield last year. It might also be worth noting that the 12 fastest times in the 2km were all achieved by under 16s! 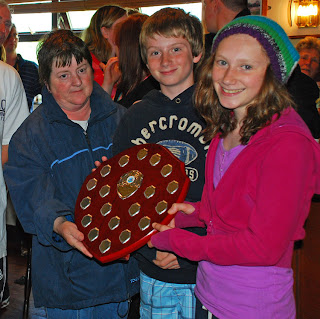 I would also like to thank a number of people who made this swim the success that it was. Firstly, a huge thank you to Fermoy Rowing Club, who provided us with the venue, even while it was being refurbished for the forthcoming visit of President McAleese next week, and provided us with two support boats and crew, it is greatly appreciated. A great thanks is also due to all the members of Phoenix Kayak Club, led by Dónal Clancy, we are very grateful for your continued support and thanks to Gaelscoil de hÍde who provided parking for the kayakers. Blackwater Sub-Aqua Club were also a huge help on the day with boats and a very impressive array of safety equipment! Thanks also to our referee, Jackie Power, and our timekeepers, Sinéad, Imelda, Elma, Auveen and Dierdre. Finally, I would like to thank Riordan's SuperValu for supplying us with two large trays of sandwiches, Noel McCarthy Carry Out who kindly donated all the soft drinks for the day and all of the people who made sandwiches and cakes and helped out with the teas and coffees etc. afterwards. If I have left anybody out, my apologies...

As a final note, the swim raised €250 for the Ballycotton Lifeboat. Thank you to everyone who donated to this cause on the day. If anyone has some photographs that they would like to send on, please do, and we can use them in the slideshow for next year. I hope you all had a very enjoyable day and we look forward to seeing you all again next year. 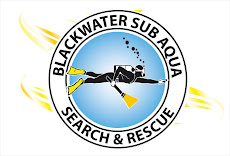 Thanks for your support and your great work throughout the year!